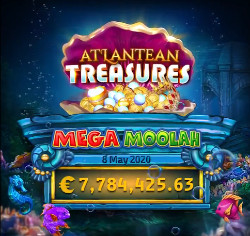 The player won the seven-figure prize on 8 May 2020 at River Belle Online Casino and joins a wealth of millionaires made via Microgaming’s progressive jackpot network, which has paid out over €1.1 billion since inception. As with all wins on the network, the €7.7 million win is due to be paid to the player in a lump sum.

Taking Mega Moolah under the sea for the first time, Atlantean Treasures: Mega Moolah was developed exclusively for Microgaming by Neon Valley Studios. The 5x3 reel, 10-payline slot includes an abundance of sunken riches, captivating artwork and colorful underwater creatures, alongside a wealth of features, including expanding wilds and respins, combined with the potential for extraordinary wins through the renowned Mega Moolah progressive jackpot. Since its network-wide release, Atlantean Treasures: Mega Moolah has awarded over €14.2 million across 238,594 jackpots, including 45 Major jackpots.

Microgaming continues to work alongside its network of independent studios to strengthen its industry-leading progressive jackpot network with exciting new progressive titles. Featuring the iconic Mega Moolah jackpot, which awarded a whopping €10.7 million jackpot at Jackpot City last month, Atlantean Treasures: Mega Moolah and Absolootly Mad Mega Moolah (Triple Edge Studios) went live in February and May respectively. Also in February, Microgaming launched its newly revamped WowPot jackpot with the release of Wheel of Wishes (Alchemy Gaming) – the first in a series of new games being added to the jackpot and network, with Sisters of Oz (Triple Edge Studios) next up.