Log in Register
Sidebar Sidebar
Menu
Install the app
You are using an out of date browser. It may not display this or other websites correctly.
You should upgrade or use an alternative browser.

Staff member
Thanks for letting me know, CATLICKER!

Staff member
We now have 11 members interested in the free league.

Post by this Sunday if you want in the draw!
Reactions: Sookie

dundeal isn't a wimp, they simply took my advice and felt like not being a glutton for punishment and stick around for a pounding by the So Cal Rams !!!!!!!!!!!!!!!!!
Reactions: Sookie and Mben

This means, if you want to be a part of the draw to play this season, YOU MUST POST IN THIS THREAD BEFORE MONDAY!
Reactions: Sookie

STR8LAGGER said:
"I'd make fun of you Peetey, but let's just say my team last year? Ahem! Hope springs eternal though, and just like my beloved Dolphins, I will rise from the ashes of loserdom, and kick ALL your butt's! "

DID THE DOLPHINS EVEN PLAY FOOTBALL LAST YEAR AT ALL??? Just sayin I thought they stopped like at least 10 years ago now havent heard anything about them since Marino was just barely not a rookie anymore and even then they STILL SUCKED BALLS! No offense intended and I'm a Raiders fan so can't say too much at least not until all the Davis's Die off so they can have a real coach finally lol. But the Dolphins you poor poor ol lady you got dropped on head once or twice maybe???
Click to expand...

Thank you Mben. I'll send Paid League on the 3rd. There are a couple good players on those two teams, but if we pick them, they can ride the pine for Week 1. As for Brady? I pray he gets to play. I want NO asterisks when Miami wins The AFC East this year! Thanks again to Belgamo, and you for doing these Leagues. This has become my FAMILY League!

Mikey7a said:
Thank you Mben. ...... Thanks again to Belgamo, and you for doing these Leagues. This has become my FAMILY League!

You're welcome and "awwwwww".

Staff member
We still need one more member for the FREE league. Who wants a chance at $50 FREE?

I'm gathering all the emails for Belgamo this morning so he can send off the invites sometime between today and tomorrow. I hope everyone has their emails updated for the forum.
Reactions: Sookie

Mben said:
We now have 11 members interested in the free league.

Here are the members who are in the free league:

Here are the members in the paid league:

Expect your FF invitation email from the NFL soon!
Reactions: queenmap and Sookie

Woot thanks for the draw! I am in and ready to rumble.
Reactions: Mben

queenmap said:
Woot thanks for the draw! I am in and ready to rumble.
Click to expand...

Staff member
Ok, the above list has been sorted.

We have one member who has not registered yet and another team that I can't place to a member. 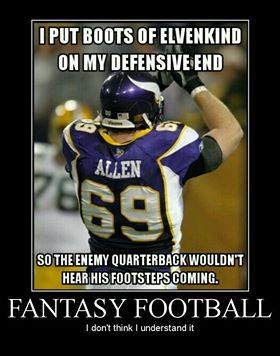 Watch out everyone .... my BOYZ are coming and hell is following them!!!!

Ready to Rock! Just waiting for Belgamo to send the message so I can get my monies in. Good luck all, you're going to need it!

Staff member
I've PM'd everyone reminding you all about the drafts.

Only the Electric Company can keep me away! Woohoo, are we ready for some Football?
Reactions: Mben

can I still get in on the free league???
Reactions: Mben

jumboscampi said:
can I still get in on the free league???
Click to expand...

Staff member
For those of you in the FREE league ... if you want to send $25 via PP to Belgamo for contributions to a side pot, you can.

Here's the breakdown on the side pot:

Winner did contribute - wins the $50 plus the whole side pot
Last edited: Sep 16, 2015
Reactions: Sookie

I just got wind of the side pot. I'll get in, but can't donate til Friday. Is that okay ?
Reactions: Sookie and Mben

CATLICKER said:
I just got wind of the side pot. I'll get in, but can't donate til Friday. Is that okay ?
Click to expand...

PM sent to all the "paid" team owners and to you, CATLICKER.

Mben said:
PM sent to all the "paid" team owners and to you CATLICKER.
Click to expand...

Well its the start of week two, time to take down another couple of souls!
Reactions: Sookie and Mben

Just wondering how many of us in the Rookie League got into the "side pot" ???
Reactions: Mben and Sookie
You must log in or register to reply here.