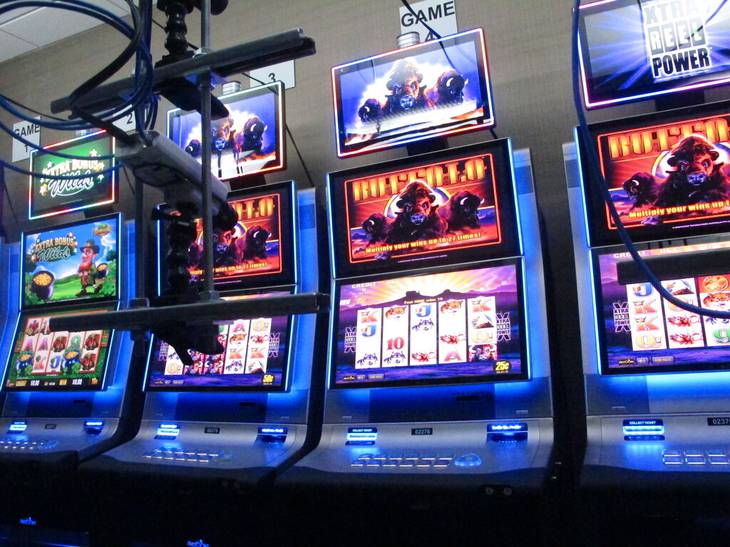 This Feb. 10, 2020 photo shows slot machines in a secure room at the Hard Rock casino in Atlantic City N.J. that have been connected to the internet as part of a new product offering.
The technology lets people use the internet to gamble on real-life slot machines that are inside the casino.

ATLANTIC CITY, N.J. — Slot machines, the bread and butter of the casino industry, long ago lost their nicknames as “one-armed bandits” when manufacturers did away with the lever gamblers had to pull in order to activate the machine, replacing it with buttons.

Now, people can gamble on a real-life slot machine without touching it at all.

Atlantic City's Hard Rock casino unveiled slot machines Monday that exist inside the casino, but which are entirely activated and played by gamblers over the internet. The casino and its technology partner, Softweave Ltd., say the 12-machine offering is the first of its kind anywhere. Patrons at the casino can look at the machines through peepholes in a wall of the secure, off-limits room where the machines sit on the second floor, with an array of cameras set in front of them to let players see exactly what is happening with the machine as it is activated.

“The psychology, there are brick-and-mortar players that have a fear of doing things online,” said Kresimir Spajic, senior vice president of online gaming at Hard Rock International. “This is helpful in transitioning them into online customers. This is a real, physical machine that they can see, almost like they're sitting in front of it.”

Joe Lupo, Hard Rock's Atlantic City president, said the remote-controlled slots are the natural outgrowth of live-dealer tables games that have been growing in popularity in Atlantic City over the past six years.

“Credibility and transparency have been paramount to seeing online gaming move forward," Lupo said. "The difference between seeing a computer image as opposed to the kind of machine that a customer has been playing for years, it may be easier to understand.”

Online or in person, slots work the same way. Their foundation is technology called a random number generator, which does exactly that: comes up with numbers at random. State gambling regulators put the devices through extensive investigation and testing to ensure the integrity of the games.

The new machines at Hard Rock are no different: They are the same type of machines that exist by the thousands on the casino floor, only they are connected to the internet so that they can be activated online.

Players with a valid internet gambling account with Hard Rock can access the new machines through the casino's online gambling website. If all 12 machines are occupied by other players, others can join a queue waiting for one of them to become available. While they're waiting, they can still play online slots or table games, Lupo said.

Spajic said another potential benefit is the ability to play popular slot machines that have not been made available online previously.