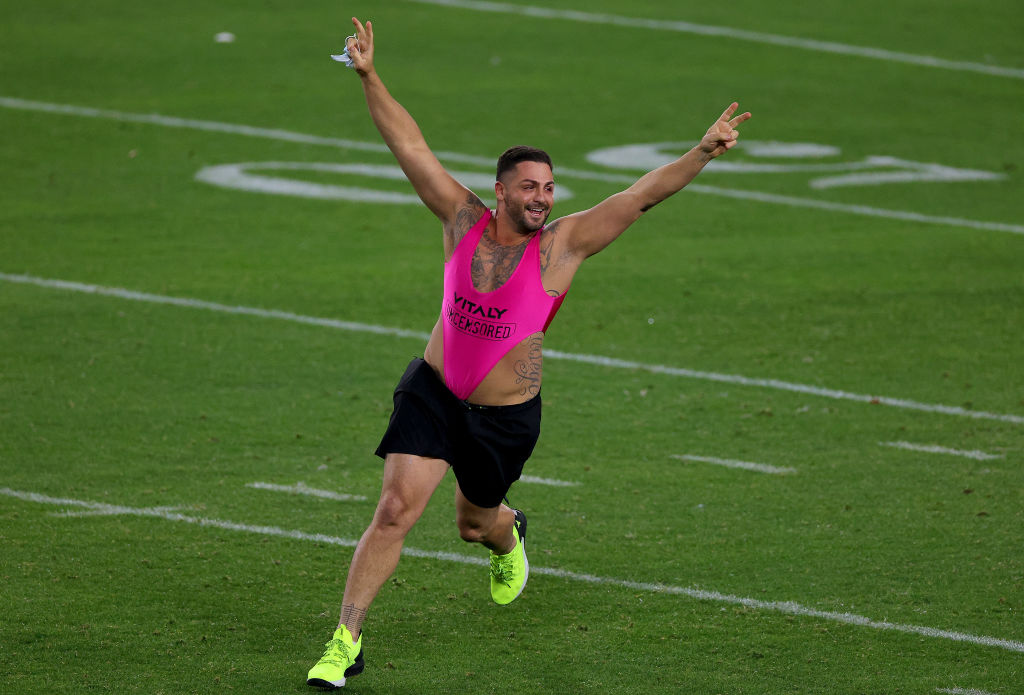 In the fourth quarter of Super Bowl LV, a guy disrupted the game after he came out on the field in a pink leotard and escaping security before he took a dive at the goal line.

His legend has seemingly grown this week with a rumor circulating that the fan turned the stunt into cashing in six figures.

A graphic circulated around social media claiming that the streaker placed a $50,000 prop bet at +750 odds before the game that a fan would run onto the field. That means he would’ve walked away with some $374K.

SporstBetExpert shared a photo of the guy and said: “Yesterday’s Super Bowl streaker bet $50k on a prop bet at +750 that there would be a streaker at the SB.

Betting reporter Todd Fuhrman does not believe this in anyway:

I’ve seen this story circulating on social media and wanted to say my .02 cents as the gambling space continues to get polluted

I won’t believe it’s anything but garbage designed for clicks until someone shares the offshore or international shop taking 50k on novelty props pic.twitter.com/NIxLCdLSEF
— Todd Fuhrman (@ToddFuhrman) February 9, 2021

Speaking to NBC 6, Andrade said: “It was kind of spur of the moment, a little bit of liquid courage and adrenaline rush.

“It felt kind of like I was skydiving, so I rushed the field. The first thing I wanted to do was kiss [Chiefs quarterback] Pat Mahomes on the cheek.”

As seen by the letters on his leotard, Andrade had been promoting an x-rated site for Russian YouTuber Vitaly Zdorovetskiy, who runs Vitaly Uncensored.

Andrade said the stunt was ‘freezing cold’ as he stripped down to a bathing suit and shorts, adding: “I threw my sweater on the floor obviously to run so all I had was this G-string bikini, and the cops thought it would be a funny joke to keep me in handcuffs so that I couldn’t adjust myself for about the first eight hours before I got transferred to the police station, where they were actually very kind and they were all laughing.”