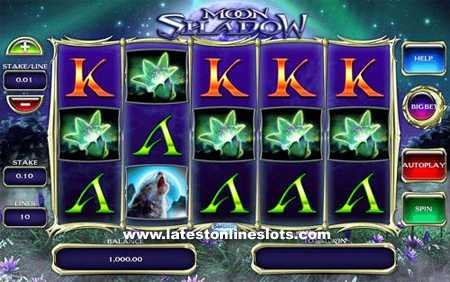 Moon Shadow is a beautiful new slot game that was released by Barcrest, which is a subsidiary of Scientific Games. For thousands of years, the moon has held special powers for some. It has been the focus in many love songs and has thought to have influence on earthly events. What a dark night it would be if not for the moon glowing high in the night sky.

Taking the sheer power that the moon has over many, Barcrest has used it to create their gorgeous online slot. The new slot lies on a background of a mystical forest where the moon shines bright and the Moon Queen rewards those who play the game. The 5 reels and 10 paylines contain symbols such as a howling Wolf, an Owl, a glowing Flower, the Moon Queen and the high cards from a deck of classic playing cards.

Besides the beauty of the new slot machine, what is the real attraction? The moon itself could be the answer because it does hold magical powers for many people. For those who are more down to earth, the Moon is the wild symbol in Moon Shadow. It will replace all other symbols to create winning combinations. But wait because that is not the main feature.

The Moon Queen is the scatter symbol in the new slot game and is the key to unlocking a very magical bonus round. The Moon Queen can appear on reels one, three and five. When this happens, you will be rewarded with 10 free spins. For every Moon Queen that appears on the fifth reel during your free spins, you will be rewarded with four to eight additional free spins. Before the free spins actually commence, one of the symbols that appears in the reels will randomly turn into a wild symbol. It will remain “wild” for the duration of your free spins.

One other feature of Moon Shadow that I cannot forget to add, is that even though the slot machine has ten fixed paylines, you can choose to make it a twenty fixed payline slot game. You do so by activating the “Big Bet” feature.

Players will find the attractive new slot game Moon Shadow at Slots Magic. New players can claim a €1000 1st Deposit Bonus as part of their €2,500 welcome package at Slots Magic.